We ended up scrapping yesterday’s book work lesson plans in favor of more practical lessons in technology, deportment, and budgeting.  In other words, the day began with a telephone problem that resulted in me having to spend a lot of time in online chat with the phone company, move furniture to disconnect and reconnect everything, and for the grand finale, climbing a ladder to disassemble the FiOS battery backup box to do a hard reset on the entire system.  Bugaboo and Beanie were hugely impressed, and, blessedly, Mr. Man and Baby Guy managed to sleep through most of the amateur theatrics.

Once the telephony problem had been resolved, the girls settled in for some fine motor skills work (in other words, they wanted to color, which sounded like a grand idea to me), and the boys woke up in the mood for a hearty breakfast.  They were ready for lunch an hour after breakfast, then for a nap.  By 11:30, the entire tribe had eaten two meals and gone back to sleep. I even caught a bit of a nap myself!

Early nap times lead to early waking times, which left us with an unexpectedly large expanse of afternoon to fill.  I briefly considered breaking out either the school books or the story books, then decided that such a lovely sunny day would be better spent running the errands that had gotten a little backed up this week.  When I asked the tribe if they’d like to visit the craft store to pick up a few supplies for projects they could do with their cousins while the Thanksgiving turkey cooks on Thursday, three little kids started jumping up and down and chanting, “Craft store, craft store, we love the craft store!”  while Baby Guy chortled and clapped his little hands.

Well, the long and short of it is that I left a large quantity of supplies on the counter.  The kids were actually pretty good until we got to the checkout line, but after 10 minutes of not being acknowledged by the cashier, who could not seem to process our payment or make eye contact without interrupting her description of her entertainment plans, Beanie and Mr. Man started to pick at each other, which led to Bugaboo trying to separate the combatants, which led to more and louder unpleasantness, and to me asking the manager to please void the sale and return my rewards voucher to me.  I will spare you the account of that particular conversation.  Suffice it to say that the kid volume continued to escalate while the manager tried to convince me to hang out for another 15 minutes so she could call the help desk and straighten out their computer problem and thus be able to process everyone in the (now considerable) line behind us’s payments.

As I shepherded the now-sobbing tribe out to the van, I pointed out to them that if everyone had been able to use good manners in the store, we might  have been able to wait out the computer problem and thus return to base with our collection of foam sheets, glue dots, and brightly colored feathers, but since there had been screaming, lying on the floor, and too much grabbing of both people and things, we couldn’t stay in the store long enough to complete our purchase.  Once everyone was loaded into the van, we continued that conversation, which was at first punctuated by several reminders to Beanie to take a couple of deep breaths, as she is nearly impossible to understand when she is wailing.

Twenty minutes later, we’d had a thorough debriefing.  Bugaboo and Beanie pleaded to be allowed another chance to show they could behave properly, even in such an exciting place as a craft store.  We talked about the logistics of who would hold the stroller in which location to minimize conflicts, and decided that Beanie would walk by the back seat with Baby Guy, while Bugaboo would take point by Mr. Man, and clarified that the first wail or scream would abruptly end our outing.

Off to another craft store we drove.  Any errands that involves the mall must be completed within the next four days, as I refuse to venture anywhere near the place from the day before Thanksgiving to until after New Year’s Day, and our second attempt at acquiring craft supplies happens to be located in the front of our local retail palazzo.  I was tremendously pleased with the tribe’s good conduct on this stop; Mr. Man actually sat patiently in the stroller, and the girls graciously said their “excuse mes” every time we passed another shopper.  For their efforts, the girls each got to select a new coloring book, Baby Guy scored a koosh ball, and Mr. Man chose a flashing red reindeer nose, which he wore happily for the rest of the day.

On the way back to the van, Bugaboo helpfully pointed out that we were at the mall, and that the mall not only has a play park, but also features a number of places with highly desirable dinner options.  I heaved a very deep sigh and asked her to give me a moment to think about it.  As I considered my mental to-do list, I remembered that it included getting the girls’ hair cut, and possibly Mr. Man’s as well.  The mall has one particular establishment that goes nearly overboard in accommodating our tribe, and food was starting to sound like a pretty good idea.

After fueling ourselves with chicken nuggets, milk, and fruit, we headed for the haircut place, which was, to my relief, empty of other clients.  The stylists all waved and smiled as we walked through their door, and Bugaboo, Beanie, and Mr. Man were quickly and simultaneously swathed in zoo animal aprons.  There are exactly two places in town where I’ll take the tribe for haircuts, and both earned our business for that kind of service!  Twenty minutes later, three kids were shaking hands with the hairdressers and thanking them for the nice haircuts, while Baby Guy was soaking up the adoration of the stylists and a couple of ladies who had come in to get their own haircuts.  Lollipops were handed around, and we were off to the play park, where the kids desported themselves until Daddy arrived about an hour later.

Upon his arrival at the playpark, Manie advised me that there was absolutely no one in line to see Santa Claus, and that we had four children with clean faces, three of whom had fresh haircuts.  After we quickly changed the boys into clean shirts, we all headed towards Santa’s little habitat, so named after Beanie informed us last year that the mall has a “pet Santa”. 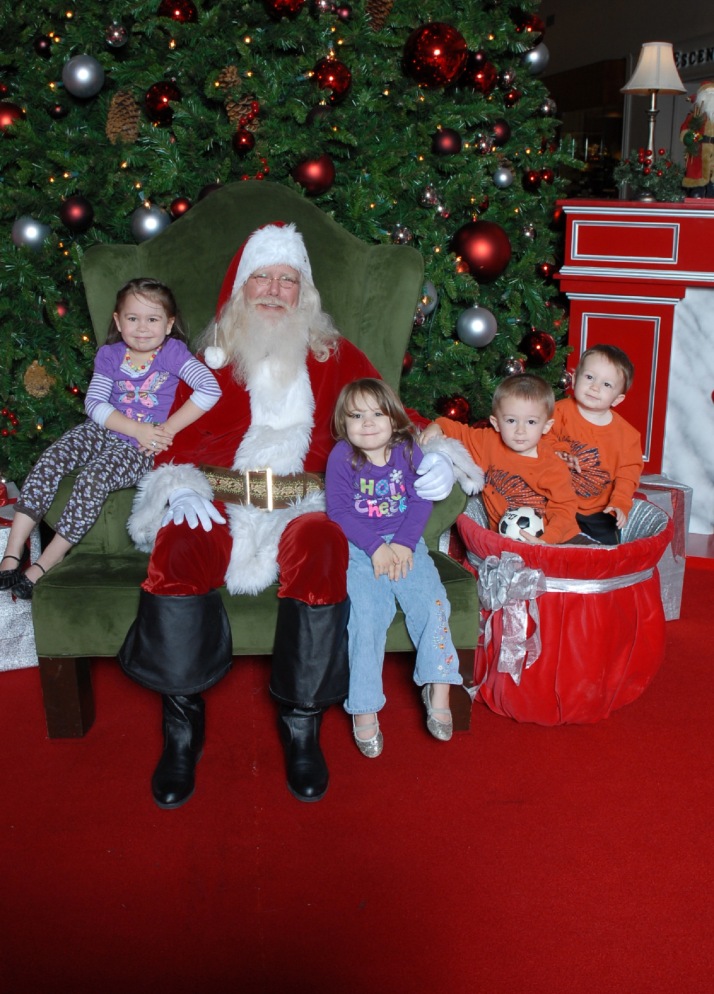 After our visit, and now that Manie had arrived to help with the cat-herding involved with four kids under the age of six, I had a moment to look around, and noticed, to my horror, that the entire mall is opening at midnight on Black Friday, the day that traditionally heralds the beginning of the Christmas shopping season.  I was appalled.  As much as we enjoy our little shopping outings, there’s no sale in the world that’s worth dragging all those people away from their families on Thanksgiving night so the bargain hunters can trample each other.  It’s bad enough that the retail world barely pauses to acknowledge Thanksgiving — and, in some cases, Halloween — any longer before the Christmas lights, merchandise and popular music take over the stores.  I’m glad we caught all of the Christmas lights at the mall last night, because we won’t be returning to the mall until well after the holidays.  Monday’s writing project may include a letter to the mall’s management about the importance of family and rest, both of which should take priority over doorbuster deals.  I know economic times are tough, but that’s ridiculous and, to my mind, mean.

Today’s prayer:  Lord, thank You for little blessings to guide and teach, and for their hearts which are open to lessons of kindness and love.  Thank You for Bugaboo’s understanding that Christmas is Your birthday, and that while Saint Nicholas is a friend of Yours, You are the reason for all the pretty lights, for the presents we exchange in remembrance of Your matchless gift.  Please help me keep uppermost in their minds and mine that there is no material good that exceeds the value of Your law and Your love, and help me teach them to share those truths lovingly and gracefully.

2 thoughts on “Living in a material world”

Please share your thoughts! I don't know who reads this, but the stats tell me someone does. I'd like to know what you took from our little stories and prayers. Cancel reply